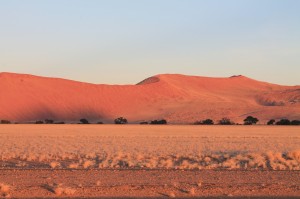 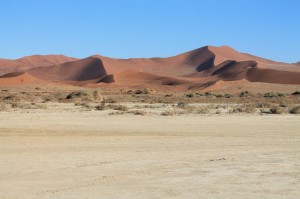 Before we knew it morning had come and we found ourselves trying to wake up in a Land Cruiser rumbling toward Namib-Naukluft National Park.  It was about an hour’s drive from our camp.  As we drove, we watched the sunlight come up over the park’s enormous red sand dunes, creating squiggle lines across the horizon.  It was some of the most spectacular scenery we had ever seen. 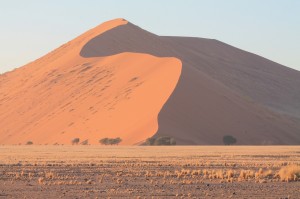 The Land Cruiser eventually came to a stop at the base of Dune 45 – each of the dunes in the park is numbered for easier identification.  This dune was right off the road, and was climbable.  Quite an adventure! 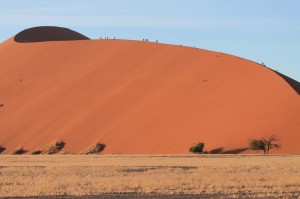 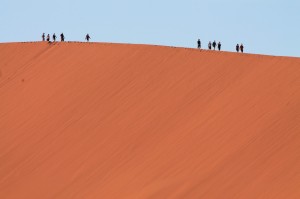 Climbing a monster sand dune isn’t as easy as I thought it would be.  You learn very quickly that the easiest way up is by walking right on the ridge, directly inside the footprints of the person in front of you.  The folks in front pack the sand for you and make each step a little bit easier.  We didn’t hike all the way to the top of Dune 45, but we did make it a good distance up – high enough to feel like we were on top of the world. 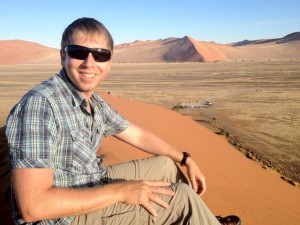 After making our way down and getting at least some of the sand out of our shoes, we drove on toward Sossusvlei and Deadvlei.  These two areas, salt and clay pans around which some of the largest sand dunes in the world have formed, are the main attractions of the park.  As we approached, our guide stopped the car and pointed out the tallest sand dune in the park, affectionately called “Big Daddy”. 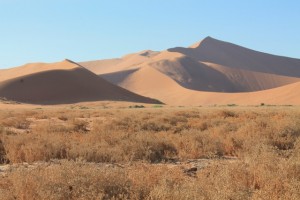 Big Daddy averages 350 meters in height.  Although a bit intimidated after climbing the now seemingly easy Dune 45, we decided that climbing Big Daddy was something that we just had to do.  We’re only here once, right? 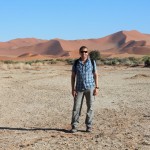 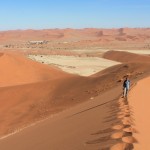 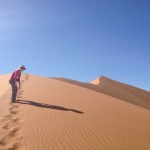 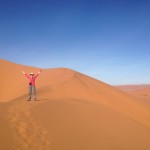 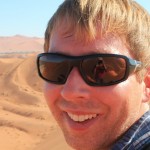 Luckily for us, two other women in our group also decided to climb and were in a little better shape.  We walked behind them most of the way, using their footprints as we had learned.  But, it still was not easy.  The climb took us almost 2 hours and our legs were burning.  But, we got an incredible sense of accomplishment when we reached the top. 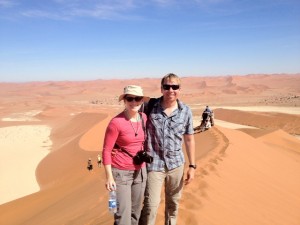 The way down was much easier – just pick a side and start running.  We chose to run down the side of Big Daddy adjacent to Deadvlei.  You can see Deadvlei above, the white area on the left side of the picture.  Deadvlei means “dead marsh”, an appropriate name due to the dead trees that still stand there.  It’s kind of eerie.  You can see the trees below, and if you look closely, you can see the path we took down the side of Big Daddy.  The video below shows what the descent was like. 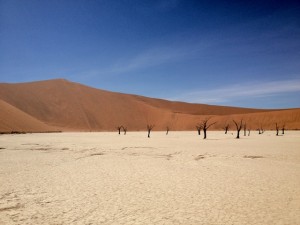 What wasn’t captured on the video was when started running uncontrollably fast and almost ate it headfirst down the hill.  Luckily, I was able to fall in a semi-controlled fashion and stop myself.  But, being as sweaty as I was I became covered in sand literally from head to toe.  It was a gritty experience.

I still have Namibia sand in my shoes to this day.