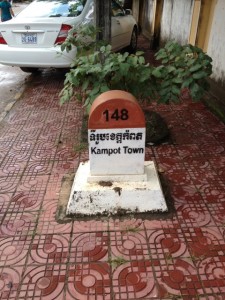 Except in Siem Reap, the jumping off point for tours of Angkor, tourism has yet to completely take over Cambodia.  So, when we arrived in the small town of Kampot, about 3 hours south of Phnom Pehn near the coast, we very much felt like we were witnessing real, everyday life in Cambodia.  And at this point in our journey, especially after having been surrounded by westerners in Bali & Singapore, the vibe in Kampot was very refreshing.  In fact, touring this little town is, thus far, one of the highlights of our adventure. 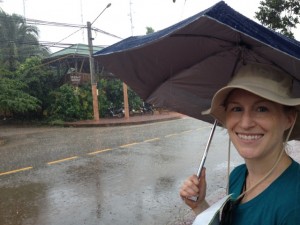 We spent our first day in Kampot walking through the town in the rain, having arrived in Cambodia just as the rainy season was coming to an end.  The Cambodians didn’t seem to mind the rain at all.  They just went about their business on bicycles and motor scooters without rain gear or umbrellas, knowing that in a little while the sky would clear up and they would dry out.  No problem.

Walking through Kampot was quiet with relatively little traffic and we spent our time just observing what was happening all around us.  There were no touts.  There were no badgering tuk-tuk drivers.  Just people doing their thing and occasionally looking up to stare at the two random white folks that were walking down their street. 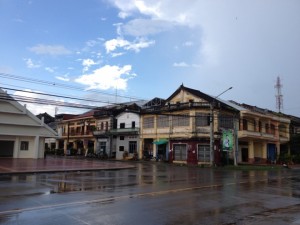 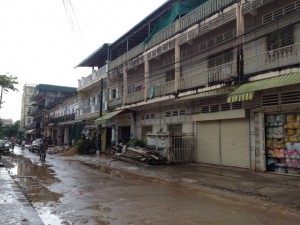 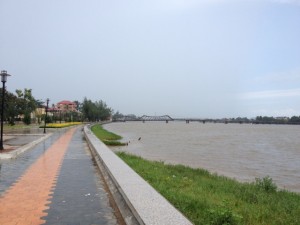 We walked through the local market, ducking under blue rain tarps and stepping over open, concrete gutters between stalls.  We bought some delicious mangosteens (we could do an entire post about the virtues of this fruit that we are unable to get in the U.S.) from a woman in the market.  When I tried to pick them out, the woman brusquely discarded my choices and picked some out for us to make sure we got the good ones.  It was a funny and genuine moment.

Eventually we found our way to the main roundabout, which has the world’s largest durian fruit statue.  I have no facts, but I’m willing to go on record and say that this is true.

We stayed in a little hotel right on the Kampot river called Rikitikitavi.  The staff was fantastic, the restaurant had amazing food for next to nothing, and during happy hour they just went ahead and brought you two drinks for the price of one. 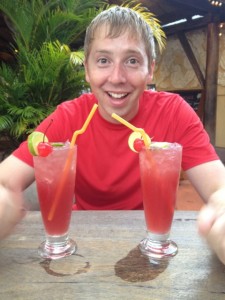 The hotel restaurant and bar had a wonderful view of the Kampot river and the Elephant Mountains.  And when the rain cleared off that night, we got to watch one of the most beautiful sunsets we’ve seen on our trip so far.  That’s Shelley taking a photo over the water in that second shot…  A great way to end a perfect day. 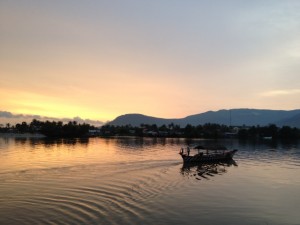 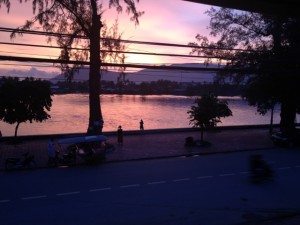 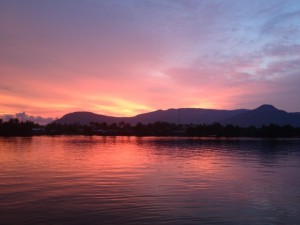 On our second day in Kampot, inspired by an episode of Anthony Bourdain’s show, “No Reservations,” we took a tuk-tuk tour to Kep, an even smaller town on the Cambodian coast that is famous for catching and cooking crab.  The rain stayed away for us and we had a spectacularly beautiful day.

On the way to Kep, we stopped at a pepper plantation and tasted some fresh Kampot pepper.  It grows on a tall vine, and the peppercorns are picked entirely by hand.  These plants are only 12 years old, as it’s only been 12 years since the country has stabilized enough politically to enable enterprises such as this. 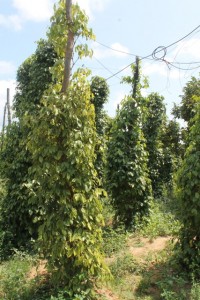 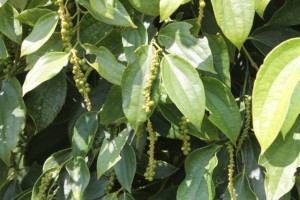 When we arrived in Kep, we had a delicious crab lunch, looking out over the water, and watched as the local people bought and sold the catch of the day at the crab market.  That blue sky remained with us the entire day. 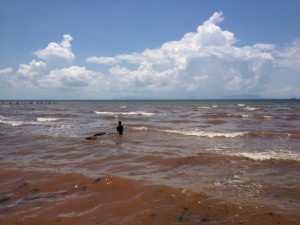 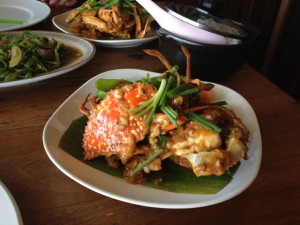 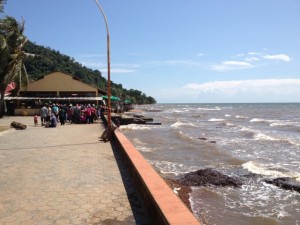 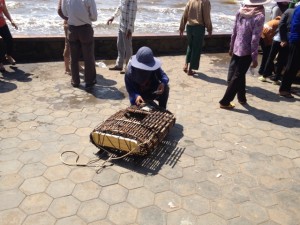 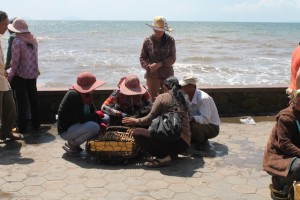 There really isn’t much more to see or do in Kep now.  But, before the Khmer Rouge, Kep was very much a resort town.  Overlooking the coast were many burnt out villas, ghostly reminders of the genocide and Cambodia’s brutal past. 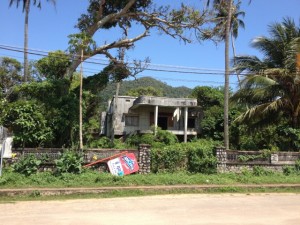 Cambodia is quickly emerging from its past, and I have a feeling that in just a few years, Kampot and Kep will be very different places.  But, for Shelley and me, they will always be a very special part of our SE Asian Adventure.

This entry was posted in Adventure 2012, Food, Places. Bookmark the permalink.

One Response to Holiday in Cambodia