If Your Husband Jumped off a Bridge, Would You?

Long before we started planning our honeymoon, before we ever started talking about visiting New Zealand, I knew that if I ever made it there, I wanted to go bungy jumping.  I guess I just took it for granted that I would want to try it in the place where it originated.  So once we added New Zealand to the itinerary, I never mentioned our visit there without also saying that we had to make sure to include bungy jumping.

John was less convinced.  He didn’t say no to the idea, but he was not so enthusiastic about it.  I guess while I was excited, he was nervous.  But he agreed to go along.  So once we made it to Queenstown, the self-designated “Adventure Capital of the World,” and the home of bungy jumping, we booked our jumps at AJ Hackett Bungy, where the bungy pioneers AJ Hackett and Henry van Asch made their first bungy jump in November 1988.  They jumped off the Kawarau River Bridge, which sits about 43 meters, or 141 feet, or 13 stories, above the river.

The Kawarau River is a beautiful attraction in and of itself.  For years I’ve thought that the scene towards the end of the first Lord of the Rings movie, where the members of the fellowship of the ring are rowing down the River Anduin through Argonath, the twin pillars of the kings, is one of the most beautiful scenes in the movie trilogy.  Little did I know that that particular scene was filmed on the Kawarau River, just around a bend from where the AJ Hackett Bungy site is. 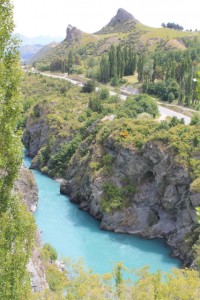 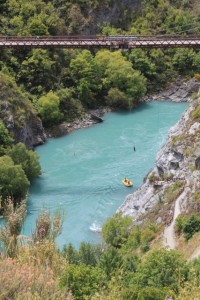 We scheduled our big jump for late morning, and we arrived a little ahead of time so we’d have a chance to watch a couple of other folks jump before it was our turn.  I think that probably only added to the nerves.  By that point, I had joined John in feeling incredibly anxious about the jump.  Before we walked up to the bridge, we both made nervous trips to the bathroom and found the signs indicating the women’s and men’s bathrooms to be amusing. 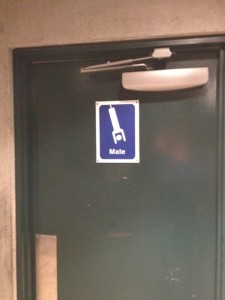 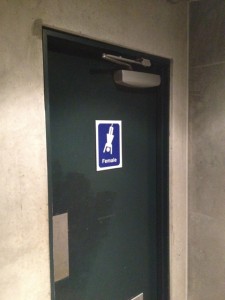 Then it was time to walk the plank.  As we stepped onto the bridge, John all of a sudden got really excited and his nerves completely melted away.  Meanwhile, I was shaking.  With his newfound enthusiasm, John volunteered to jump first.  You can see the excitement in John’s face and the trepidation in mine. 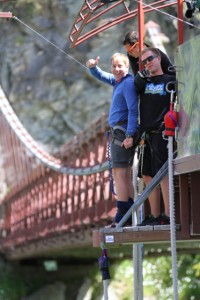 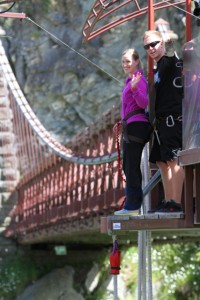 After getting all strapped in, John stepped up to the edge and actually dove off of the bridge.  When my turn came, my knees buckled and I just pitched forward.  During the initial fall, before the bungy cord snapped me back, I really thought that that might be it for me, that I would plunge headfirst into the glacial-fed river, and the honeymoon would be over.  But then the cord snapped me back, and all of sudden it was really fun.  During the next several bounces, I regained my form a little bit. 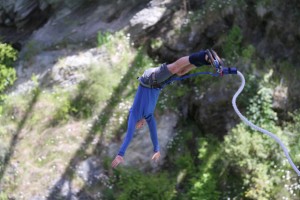 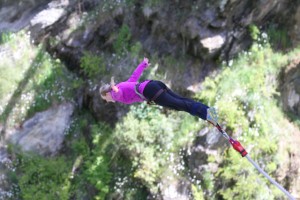 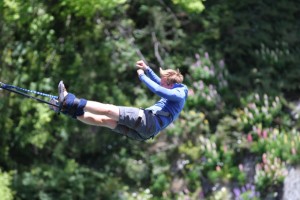 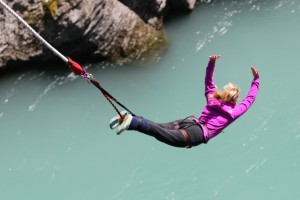 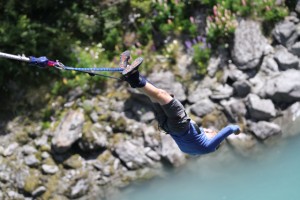 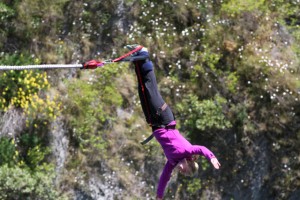 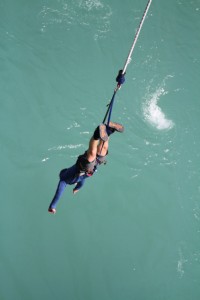 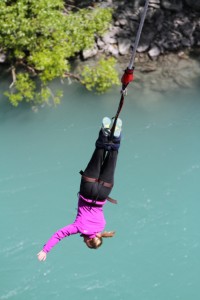 Then the crew on the bridge lowered the cord and the “rescue crew” waiting in the raft below reeled me in.  They were asking me questions about my education and where I was from, I think to bring me back around and make sure I was alright.  I had so much adrenaline pumping through my veins, and such an extreme sense of relief and excitement, that I almost couldn’t talk.  When I met up with John on the stairs back up to the main building, we both shouted, “Let’s go do it again!”  But fortunately sense won out and we just headed off to check out the pictures of our jumps. 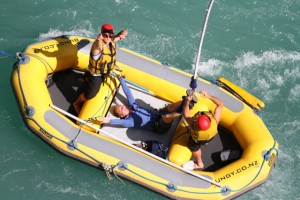 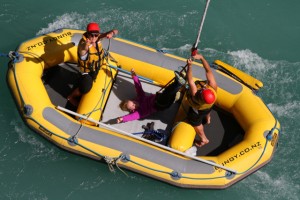 This entry was posted in Adventure 2012, Recreation. Bookmark the permalink.

One Response to If Your Husband Jumped off a Bridge, Would You?