We were told we should leave the hotel by 4am, so when our alarm went off at 3:30, we crawled out of bed, pulled on our clothes, and brushed our teeth.  Bleary-eyed, we climbed into a taxi, but all we had to say to the driver was just one word, “Tsukiji.”  He smiled and we headed off.

We were on our way to the Tsukiji Fish Market in Tokyo, the largest fish and seafood market in the world, to wait in line for a chance to watch the tuna auction that takes place every morning starting at 5am.  Because the auction is the real deal and isn’t really set up for tourists, visitors to the auction are capped at 120 each day and are admitted in two groups of 60–the first at 5:25am and the second at 5:50am.  Our taxi dropped us off at the main entrance to the market, but the registration area for the auction was a few blocks away.  We consulted the map briefly and then took off.  I kind of felt like we were on the Amazing Race.  Three Spanish girls crossed paths with us and asked if we knew where the registration area was.  We said we weren’t sure but that we thought it was in the direction we were headed, but they continued on the other way.  A couple of blocks later, after a wrong turn and then a helpful point in the right direction from a fish vendor, two couples raced by us in their flip flops hoping to secure a place in line.  It was 4:25am and I was panicked that we might miss out on getting a spot.  I started running, too, and then we saw the line and we dashed to the end of it.  The men who manage the line handed each of us a piece of paper with a number on it–the golden ticket–we’d made it!  Hooray!  (In case you’re wondering, the Spanish girls made it in time, too.)

We were late enough to have been placed in the second group, so we waited in line and watched the sun rise over Tokyo until 5:50am, when we were marched, single-file, and wearing our designated fluorescent mesh vests identifying us as admitted observers, into the tuna auction viewing area.  I think we both expected it to be noisy (although now I’m not sure why–we were in polite and refined Japan after all), but it was quiet, with men in galoshes milling around and inspecting huge, whole tuna resting on wooden pallets.  There was also an area off to the side where small, thin strips of tuna were laid out on a table, which the men in galoshes (yes, it was only men in there) would examine with a flashlight by holding the tuna up and letting the light shine through it.  I wish I knew what exactly they were looking for. 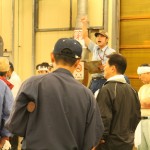 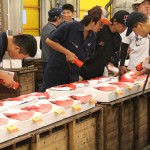 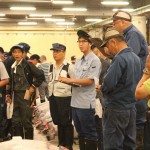 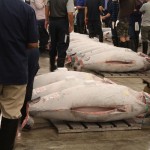 A few minutes later the actual auction process began.  The auctioneer stood on a small wooden platform placed near one of the clusters of the whole tuna and rattled off in Japanese to a group gathered around the tuna cluster.  Individuals from the group silently raised their hands to bid.  As the auctioneer continued talking, the group of men thinned until in the end a final bid was offered and accepted.  Then the whole process started over, with the group reconvening around another cluster of tuna.  We snapped pictures and filmed video throughout our allotted 25 minutes of viewing time–here’s a short clip of the highlights:

After being escorted out of the auction viewing area, we continued on, on our own, to explore the parts of the market open to the general public.  By this time it was 6:15am, we’d been up for almost three hours, and we were feeling hungry.  We wandered around looking for a place where we might get some sushi (definitely not our typical breakfast, but we were at a fish market), and we came across a small place, still within the market area, that had a long line out front.  There were a few westerners in the line, but it was mostly Japanese, and although we didn’t know what the place was, we figured if this many people were waiting in line for it at 6:15am on a Thursday morning, it must be good.  So we got in line and waited and waited and waited.  Finally, at 8:30am, we were called in to take our seats at the end of the sushi bar.  The whole place sat just thirteen people, and there were three sushi chefs behind the counter.  We ordered the omakase menu and then resumed snapping pictures as we watched the chefs in action.  We were excited–me probably more than John, considering the stomach issues he was fighting at the time–as we looked forward to the freshest sushi we’ll probably ever eat.  Each of us was served ten pieces of sushi, plus a traditional roll, miso soup, and tamago, and then we were given the choice of one extra piece–John chose the toro and I went for the uni.  It all tasted great, and we were excited to participate in what felt like a truly Japanese experience.  Here are some pictures of the sushi bar and some of our pieces of sushi: 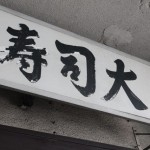 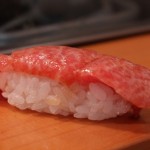 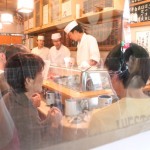 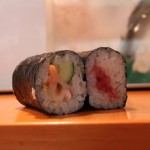 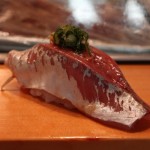 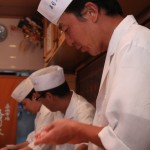 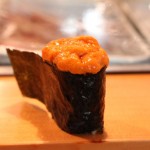 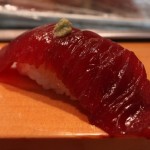 Of course, then I practically ruined it all by offending the main sushi chef just as we were getting ready to leave.  “What is this place?” I asked him.  “What’s the name of this restaurant?”  The chef looked at me in complete astonishment as he responded, “You don’t know?”  Umm, no, actually.  Ooops!  Maybe he figured we wouldn’t have found it without knowing what we were looking for.  Not helping matters, I replied, “Well we just saw the line outside and figured it must be really good…and it was!”  Oh boy.  The sushi chef handed us the card for the restaurant and we beat a path out of there, with John shaking his head and laughing at me.  Sushi Dai.  That’s the place.  And it was delicious and definitely worth the wait!  Just know the name before you go!

This entry was posted in Adventure 2012, Culture, Food, Places. Bookmark the permalink.

One Response to Sushi at Sunrise