A few days after we’d gotten to Kobe, once we’d gotten our energy back, we headed west on the shinkansen–Japan’s bullet train–for an overnight trip to Hiroshima and Miyajima. 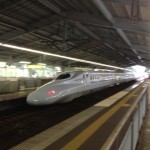 From the time we’d started planning our trip to Japan, we both knew we wanted to make it a priority to visit Hiroshima. It was an emotional day there, but also very moving.

From the Hiroshima train station, we took the local trolley to the Peace Memorial Park and made our way to the building that’s now called the A-Bomb Dome. It was originally built in 1914 as an exhibition hall, but by the time of WWII, the government was using it to house the local public works administration. When the bomb was dropped on August 6, 1945, it exploded almost directly over the building. You’d think that would mean the building would have been decimated, but although I’m a little shaky on the science behind it, it seems that the energy released by the bomb pressed down on the building instead of blasting it apart, so that while fire ravaged it, the walls weren’t knocked down (i.e., pushed apart) by the blast. In the end, it was the only building left standing near the center of the bomb blast. It became a UNESCO World Heritage Site in 1996. 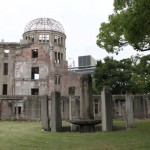 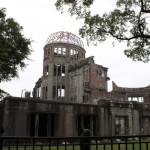 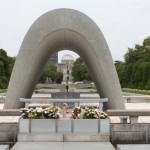 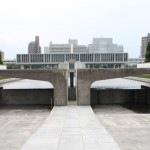 A few years after the war ended, the Japanese parliament declared Hiroshima a “city of peace,” and since that time, Hiroshima has worked to promote peace while also advocating for the abolishment of nuclear weapons. The Peace Memorial Museum, on the grounds of the Peace Memorial Park, opened in 1955 to tell the story of Japan’s involvement in WWII, including its aggression in East and Southeast Asia, and how the U.S. was drawn into the war through the bombing of Pearl Harbor, and ultimately the history of the development of the nuclear bombs that were dropped on Hiroshima and Nagasaki, and how and why those sites were chosen. We learned a great deal about the Asia-Pacific side of WWII, and of the horror of the bomb.

After leaving the museum we lightened things up by heading off in search of a traditional Hiroshima lunch–okonomiyaki–a layered dish of crepe-like batter, cabbage, noodles, egg and pork that’s cooked on a griddle and then smothered in a tangy barbecue-like sauce. You eat it right off the griddle surface using a small spatula. 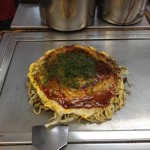 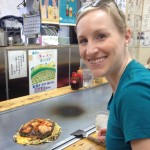 Then it was time to catch the ferry to Miyajima, a small island off the coast of Hiroshima where we’d be staying for the night. To Shinto believers, it’s considered a sacred island, and it’s famous for its Itsukushima Shrine and the orange Torii Gate that marks the entrance to the shrine from the sea. It’s a quiet and beautiful place, and we spent the night in a ryokan, a traditional Japanese inn with tatami floors, sliding doors, and thin mattresses on the floor to sleep on. For some reason the layout of the room reminded me of a cabin on a cruise ship, but then it kind of felt like a sleepover party to spend the night on our side-by-side mattresses on the floor. 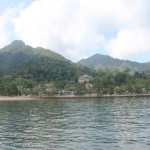 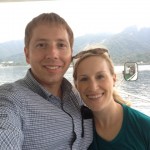 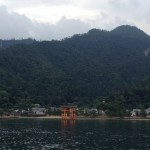 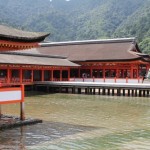 In the morning we visited the shrine and then took the cable car up to Mount Misen, the highest point on the island. The cable car leaves you with just a 30-minute hike to the top (as opposed to a 3-hour hike if you started from the bottom of the mountain), but, as usual on this trip, it was HOT and HUMID outside. John and I were already sweating through our clothes when we exited the cable car, even before we started the 30-minute hike. Meanwhile, the Japanese ladies that we saw on the trail were sweat-free, in full make-up, dresses, and high heels. I don’t know quite how the Japanese ladies do it, but they always manage to look totally put together. It was a beautiful day, and the views from the top of Mount Misen over the Inland Sea were pretty spectacular, with islands dotting the water. It looked just like the Japan you see in paintings. 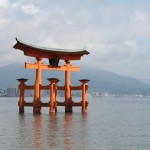 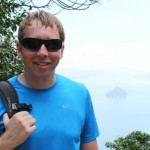 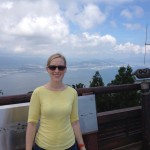 Then it was time to make our way back to Hiroshima and board the bullet train bound for Kobe. We arrived back at the Injays’ place just in time for a taco dinner–yum! Next up…John’s favorite experience of the trip!

This entry was posted in Adventure 2012, Awareness, Food, Places. Bookmark the permalink.

2 Responses to Hiroshima and Miyajima