We arrived back in Kuala Lumpur (we had a brief stay there when we first arrived in Malaysia) after a long bus ride from the seaside town of Lumut.  I was excited to be back in the big city–more and more on this trip, I’m realizing how much of a city girl I am–but we just had one night there before we were heading on to Bali.  We’d been talking about going to the movies, and here we had the chance, so we went out for an American date night in Kuala Lumpur.

After a disappointing lunch that day, and a hankering for American food, we decided to start our date night off by heading to Chili’s for dinner.  Yep, they have Chili’s in Malaysia (seven of them, in fact!), and yep, I’m a little ashamed that we headed there instead of sampling the local cuisine, but, hey, sometimes you just want something familiar. Unfortunately, though, it didn’t really hit the spot–the food was pretty awful–my quesadillas were cold and John’s chicken looked like it was still raw in the center–and to top it all off it was pretty expensive for what it was.  But then it was off to the movies, and a bargain at just $8 total for both of our tickets.  We’d been wanting to see The Dark Knight Rises, so we were pretty excited that they still had it in the theaters.  It was definitely entertaining, maybe a little silly, but we enjoyed it.  Then it came time to exit the theater. 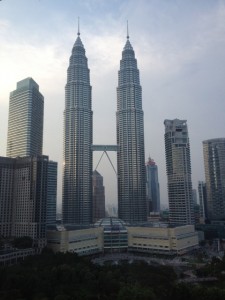 The movie theater was located inside a big shopping mall under the Petronas Towers, and by the time the movie had ended, the mall had long since closed, so instead of exiting the way we had entered, the theater staff directed us toward a back exit.  We walked down a long, windowless, institutional-looking hallway with some twists and turns before coming to a sign that I thought–from a quick glance–said that we needed to exit through the parking lot.  From John’s reading of the sign, he thought that it said to exit through the mall to the parking lot, but stupidly, I didn’t believe him.  I mean, the mall was closed, right?  How could we exit through it?  So instead of passing through a doorway into the mall, where the cleaning staff were hard at work, I led us through a doorway that I *thought* would connect to the parking lot.  We could always turn around if we’d gone the wrong way, right?  Realizing we were now in an emergency exit, we started down the stairs, but the flights of stairs just kept going and going and going, with no end in sight.  We were all alone.  It was eerily silent.  I turned and said to John, “Umm, maybe we should go back and go the way you said we should go.”  But he responded, “I don’t think we can get back out that way.”  He’d noticed that when we passed through the door to enter the stairwell, there was a sign that said “One-way door.  No reentry.”  Oh, crap.  I started to panic.

I started running down the stairs faster.  Finally, after what seemed an interminable number of flights, we reached the bottom.  But where was the door?  We turned a corner that led into an endless, dimly-lit hallway with lots of twists and turns.  We kept walking and walking, with me eventually breaking into a frantic run-walk.  I was imagining the worst and the movie hadn’t helped.  Then, after one last turn, there was a short flight of stairs leading up to a row of doors.  I ran up them and slammed myself into the push bar on the door.  It opened to the outside.  Hooray!

I turned and faced John and then started sobbing.  Now it seems totally irrational, but I guess for those few minutes I really thought we were going to be trapped in a dark, freaky emergency exit in a Malaysian mall.  Breaking taboo, I clutched his hand while we walked back to the hotel (PDA–even hand-holding–is generally frowned upon in southeast Asia.).  Whew, what a night.

This entry was posted in Adventure 2012, Food, Recreation. Bookmark the permalink.

One Response to American Date Night in Kuala Lumpur