We flew out of Bali and into Singapore on a Thursday afternoon, and in just a quick couple of hours it seemed like we had jumped planets.  On the taxi ride into downtown Singapore from the airport, I stared in wonder out the window, gaping at what appeared to be an immaculate city of the future.  The landscaped flowering bushes that lined the roads, with not a speck of garbage in sight, wowed and amazed me.  Singapore may be sterile, but in the moment, that didn’t feel at all like a bad thing!

Six years ago in London, on my very first day at Shearman & Sterling, I met my friend Anna, who’s still with the firm and now working out of the Singapore office.  It had been four years since I’d last seen Anna, so I was super excited to see her, meet her fiancé, Tom, and introduce them both to John.  We met up with Anna and Tom later that evening once they’d gotten off of work, and they took us out for our first of many delicious meals in Singapore, at the Lau Pa Sat street food center.  There’s a large covered seating area (shown in the photos below), but the evening was nice, so we sat ourselves at a table outside.  They started off by ordering us a plate of chicken wings, beef and chicken satay, and Tiger beer, and then as we waited for a number of other dishes to arrive, it began to sprinkle, and then to rain a little harder, and then it became an absolute tropical downpour.  We kept moving our little plastic table and chairs closer and closer to the big buildings surrounding the street food center, until finally we were under an overhang of a building, but the wind was still blowing the rain all over us and our table.  However, that didn’t stop us from devouring Singapore noodles, mie goreng (fried Malay-style noodles), oyster omelet, and sautéed stingray.   Finally, it was time to make a run for it—unluckily, Tom had ridden his scooter, so he set off for a drenching ride home.  Meanwhile, Anna, John, and I made a dash for a taxi, getting totally soaked in the process.  How could we complain, though?  This was the first serious rainstorm we’d gotten caught in since beginning our trip months earlier.  Once we’d made it back to Anna and Tom’s place and dried ourselves off, we settled in for a night of “quality” American TV of NCIS and CSI, laughing as we joked about the terrible dialogue. 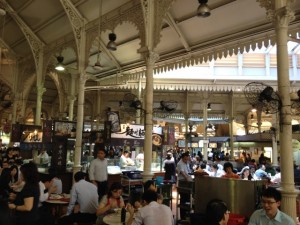 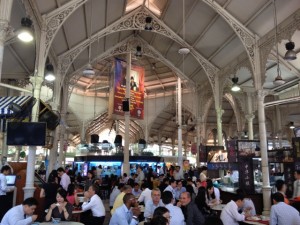 We spent Friday taking care of errands and then later that night we headed out with Anna and her friends Patrick and Laleh for plate after plate of Chinese food followed by a round of drinks at Social Haus.  Anna and I had fun catching up and laughing about the very different conversations we were having four years ago in London as compared to now, from being single ladies then to talking now about our weddings and what it might be like to start a family.  Life can change pretty quickly! 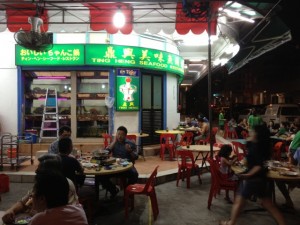 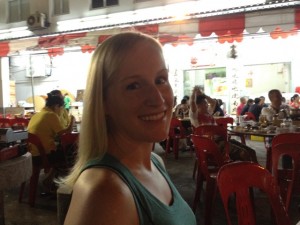 On Saturday Anna and Tom took us out for a traditional Singapore breakfast of coffee with sweetened, condensed milk (even John will drink coffee like that!) and toast with green coconut jam and soft boiled eggs.  You crack open the eggs into a bowl, stir up the runny whites and yolks with some soy sauce, and then dip the coconut jam toast into the egg mixture.  It sounds kind of weird, but the sweet and salty combination is actually really good.  (John and I ended up going back for a repeat of that breakfast a few days later before we left for Cambodia.)  Afterwards, we put a picnic lunch together and then took a taxi out to Sentosa Island.  Like much of the rest of Singapore, Sentosa Island is a fabricated paradise, with amusement parks, casinos, hotels, and restaurants, but we stuck to the beautiful beach there and relaxed for the afternoon with Tom and Anna and a bunch of their friends.

We took John for a hair cut on Sunday afternoon and arrived back at Tom and Anna’s place just in time to surprise them in the middle of practicing their wedding dance moves.  Then we all headed out for one of John’s most loved meals of the trip—Korean barbecue.  Yum!  It was an all-you-can-eat, grill-your-own meat kind of place, and Tom did not mess around with packing the food in.  I don’t know where he put it all, but he went through a lot of grilled meat lettuce wraps.  John’s equal enthusiasm for the meal made me realize how much I miss eating Korean food—it was great in London and New York, but there’s not much of it to be had in Austin.  We arrived home after dinner just in time for the four of us to sprawl on the couch for two hours of The Voice.  Ahhh, a good night. 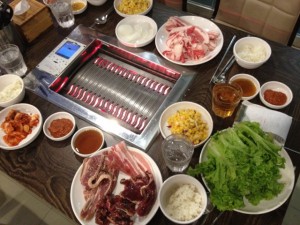 I’ll leave it to John to cover our Monday daytime, but Monday night we spent our last evening with Tom and Anna over a meal of Thai steamboat.  Basically, they plunk a big, steaming pot of broth in the middle of the table, along with a platter of raw meat, seafood, noodles, and vegetables, and then you cook the raw food in the broth, or in the grill just above it, and then you dip the cooked food in this super tasty sweet and spicy Thai sauce.  Once again, we saw Tom turn into an eating machine, but with his rigorous daily bike-run-lift workouts he earns his food, unlike us.  We learned a new Aussie slang word that night when Anna suggested that we follow up dinner with some “dero” soft serve.  That’s shorthand for “derelict,” and it turned out to be McDonald’s soft serve.  I’ll admit it—the Oreo McFlurry was good. 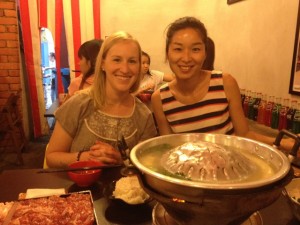 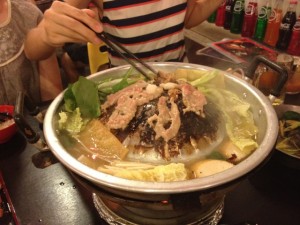 Of all of the places we’ve been so far on our trip, Singapore reminded us the most of home.  We spent a while just wandering through a supermarket, going up and down the wide aisles and snatching up granola bars and Skippy peanut butter.  After reading all of this, you may be thinking that we gained fifteen pounds during our five days in Singapore, and you’d probably be right.  We’d heard that Singapore was known for its food, and Anna and I have always built our quality time around meals, so we made the most of our reunion by indulging in all of the culinary delights of Singapore.  During and in between all of the eating, it was wonderful to catch up with Anna, get to know Tom, and hear glimpses of the beautiful wedding they’re planning for November.  I really hope it’s not another four years before we get the chance to see each other again!  Helena, if you’re reading this, maybe we can all coordinate a visit out to Santa Monica sometime.  In the meantime, we’re sending a big thank you to Tom and Anna for their hospitality, for welcoming us into their home for five days, and for sharing many memorable meals with us.  We’re wishing you all the best for a long and happy life together, and we’ll look forward to our next meeting somewhere else in the world! 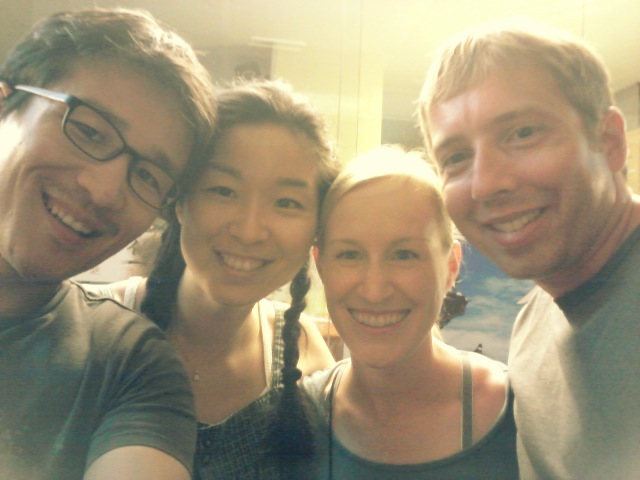 This entry was posted in Adventure 2012, Food, Places. Bookmark the permalink.
Cancel Reply