As Shelley mentioned in our last post, after a few days in Luang Prabang, we hopped aboard a boat on the Mekong river, the Mekong Sun, bound for Chiang Sien, Thailand.  The boat cruise worked great for us, because its endpoint in Chiang Sien put us in good position to drive to Chiang Rai and eventually hop a plane to India, where we would be meeting up with Shelley’s family.  We would also see very remote areas of Laos, which was an exciting prospect for us, too.

When we booked the boat several weeks prior, we had no idea who would be on the boat with us.  We were quite surprised to find out that we would be tagging along with a tour group of about 15 or so Norwegians.  We were by far the youngest folks on the boat, but everybody on board was very friendly and had lots of questions about our recent travel adventures.  And, everyone spoke impeccable English. 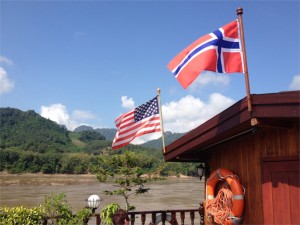 It took us 7 days to cruise up the Mekong river into Thailand.  All of the river cruising was done during the day, with the boat captain navigating by sight accompanied by years of experience on the river — nothing fancy here.

We spent our days cruising up the river and viewing the beautiful scenery.  It was incredibly remote, yet we saw thatched roofed huts protruding from the jungle, people tending crops in the silt left by the Mekong during the rainy season, and cattle grazing right along the banks of the river, seemingly belonging to nobody.  It was amazing to see people actually living out in this wilderness. 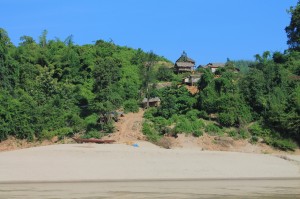 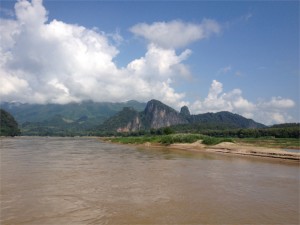 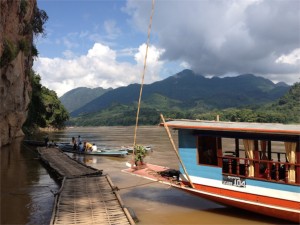 Sometimes we’d see these makeshift speedboats.  We’d read about them in our guidebooks, and most said to never ride in one because of how dangerous they are.  After seeing them, now I know why.  They’re basically narrow boats with crazy paint jobs that have modified car engines on the back of them (instead of turning a drive shaft, you’re turning a propeller).  Most people we saw riding in them were wearing helmets, and for good reason I think.  The water on the Mekong was very unpredictable, with whirlpools and large rocks hiding just below the surface.

We also got to taste the local rocket fuel, Lao Lao – a liquor distilled from a fermented rice mash.  It tastes just like you think it would, with quite a kick… 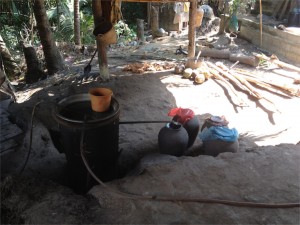 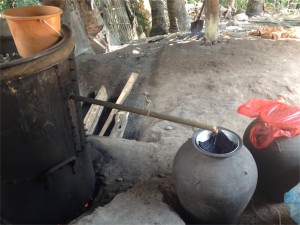 At night, the boat would be tied up along the banks of the Mekong, often on sandy banks where we could hop off the boat for some free time before dinner.  One night, when the boat was parked on a nice sandy spot, the crew invited me out for a game of Sepak Takraw.  I had wanted to see this game played while we were in Thailand, but didn’t get the chance.  So, I was really excited to try it.  Takraw is a popular game in SE Asia that’s similar to volleyball and played with a small rattan ball.  The difference, though, is that you play the game (hitting the ball back and forth over the net, scoring points like you do in volleyball) without using your hands.  You have to kick, knee, and head the ball over the net.  Shelley had fun taking pictures of all my wiffs and misses (I was able to curate the photos below…).  But, I did hit the ball over the net a couple of times, and it was a ton of fun. 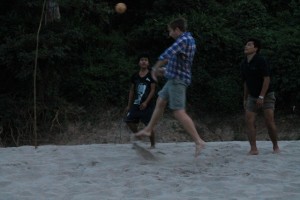 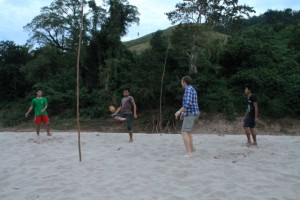 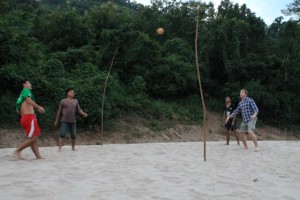 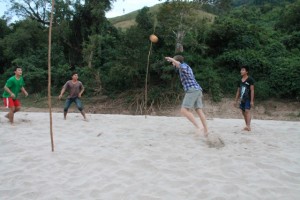 By the way, the guys (and gals?) that get really good at this game are like ninjas.  They’re super flexible and perform these incredible bicycle kick spikes.  Check it out, it’s pretty amazing.

We eventually made it to the Golden Triangle, where Laos, Thailand and Myanmar come together at the confluence of the Rauk and Mekong rivers.  From this viewpoint in Thailand, we could see all three countries simultaneously.  This is as close as we would get to Myanmar, a country that we’ll have to save for another adventure.

This entry was posted in Adventure 2012, Places, Recreation. Bookmark the permalink.

One Response to Cruising the Mekong