We spent five great days in Luang Prabang, Laos’s second city and definitely one of the most beautiful city stops on our trip.  The whole place has been designated a UNESCO World Heritage Site, so buildings both new and old are constructed in the traditional Lao wooden style, and it’s packed with striking, gilded Buddhist temples.

On our first three lazy days, we relaxed at Le Café Ban Wat Sene, where we drank coffee and ate delicious French food, thanks to the colonial legacy that was left behind.  We did get out on one of those days, though, for a really fun visit with the uncle of my good friend Alicyn from Austin. Last February, when I mentioned to Alicyn that John and I were planning to visit Laos, she responded, “My uncle lives there!”  I was surprised—in name and appearance, Alicyn is clearly of European descent, so I didn’t expect she’d have family living in Southeast Asia.  As it turns out, following his retirement, her Uncle Kenny headed to Luang Prabang to study Buddhism and ended up settling there for the last few years, where he now has a workshop in a large gallery space with a number of other artists.  At his workshop, Uncle Kenny spends his days creating and refurbishing spirit houses.  Laos is a predominantly Buddhist country, but from Uncle Kenny and others that we talked to, we learned that Buddhism there is not “pure,” in the sense that Laotians incorporate traditional animistic beliefs into their Buddhist practice.  One of these traditional beliefs involves spirit houses, which are little wooden dollhouse-like boxes.  The spirit houses provide a home for spirits that can create mischief if they’re not given a nice place to live.  Spirit houses are everywhere in Laos—on street corners and outside restaurants, hotels, and family homes—and the Laotians leave offerings inside of them—usually some sticky rice, incense, flowers, and fruit, and sometimes even cigarettes.  We met up with Uncle Kenny at a café along the Nam Khan—a river that feeds into the Mekong—for a leisurely breakfast followed by a visit to his workshop.  It was a beautiful twenty-minute tuk-tuk ride out to his gallery space, although sadly it was just in a regular tuk-tuk and not this great rainbow one that I saw—I especially love the driver on his pink cellphone. 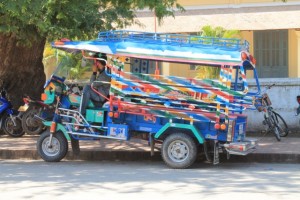 Uncle Kenny showed us around the gallery and explained his work to us and afterwards chatted with us over coffee about U.S. politics and life in Laos.  It was a lovely morning!  John took a couple of pictures of me with Uncle Kenny, and I got a few of Uncle Kenny’s spirit houses and his workshop. 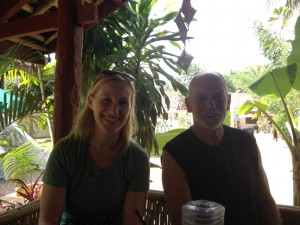 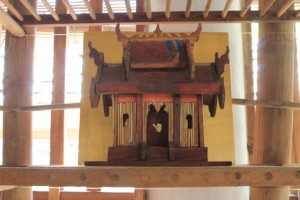 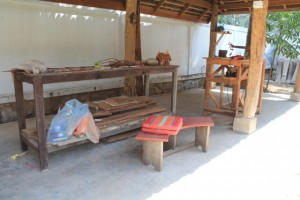 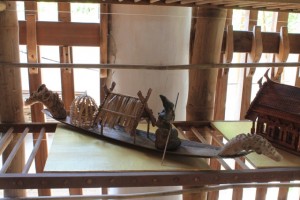 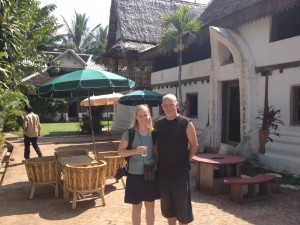 On our last two days in Luang Prabang, after we boarded the Mekong Sun (more on that to come in the next post), we visited several of the Buddhist temples that have made Luang Prabang so famous, including Wat Xieng Thong and Wat Wisunarat, plus the Royal Palace Museum and Mount Phousi for great views of the city. 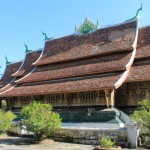 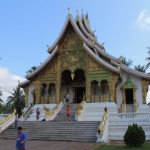 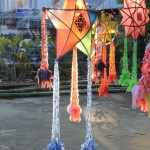 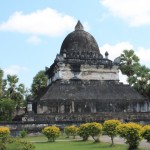 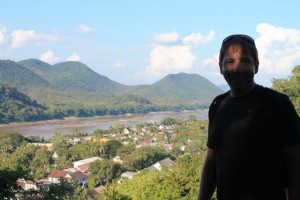 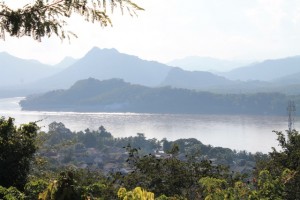 We also drove out to the Kuangsi waterfall, where we had the chance to take a COLD swim in one of the waterfall’s pools.  After only half submerging myself in the freezing water, I watched while John climbed a tree to take a jump off a rope swing into the pool.  He emerged with a smile and goose bumps. 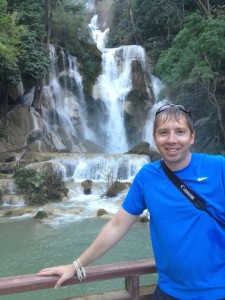 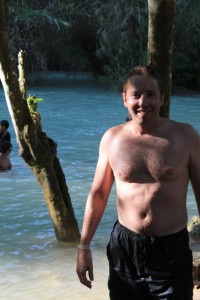 At dawn on our last morning, before the Mekong Sun began cruising upriver, we went to watch what Luang Prabang is most famous for—the daily religious ritual called Tak Bat.  Every day at sunrise, the hundreds of Buddhist monks that live in the city process down the main street with metal bowls to collect food offerings from Luang Prabang’s residents, who make merit by providing food for the monks.  It was really fascinating to watch, but trying to be respectful we hung back and just snapped a quick picture from a distance. 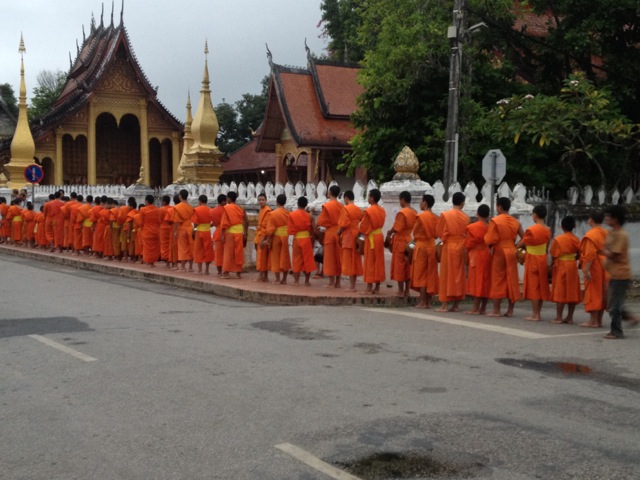 Last but not least, we visited Luang Prabang’s morning food market.  Just for my brother-in-law John B., who wondered if you can truly buy doughnuts everywhere in the world, we filmed this little video showing what the market has to offer.