Thailand is a land of contradiction when it comes to the Asian elephant. On the one hand, elephants are revered, sometimes religiously, for how they have helped shape and develop Thailand into what it is today.  On the other hand, domesticated elephants have no more rights than any other domesticated animal in Thailand.  In the eyes of the law, they are no different than a dog, mule, or other animal one might have use for when working the land.  Further, the process of domesticating a wild elephant, while steeped in Thai tradition, is a very harsh and violent process.  It’s been interesting, and somewhat heartbreaking, to learn about these contradictions and the plight of the Asian elephant in Thailand today.

There used to be over 100,000 Asian elephants in Thailand.  Now, that number has dwindled to less than 5,000.  While many of these elephants are protected as an endangered species in the wild, about 3000 of these elephants are domesticated and do not enjoy the same protections as their in-the-wild counterparts.  To further complicate matters, domesticated elephants are having a hard time finding work.  Logging, the primary job (and a dangerous one) for domesticated elephants in Thailand, was outlawed in 1989, as the removal of the rain forest was proven to worsen the flooding that occurs in Thailand each rainy season.  As a result of the logging ban, tourism has become the only means by which elephant caretakers, or mahouts, can make a living with their animals.  This has placed many a domesticated elephant out of the forest and into the city, where they work on busy streets for tourist dollars.  A hard and often times abusive life for these creatures.

Although Elephant Nature Park uses tourism dollars to further their mission of saving the elephant, you won’t enjoy elephant rides or circus shows here.  Volunteers come to work at the park for weeks at a time and ENP uses its guests as helpers to both feed and bathe the elephants.  That’s exactly what Shelley and me were able to do on the day we visited the park! 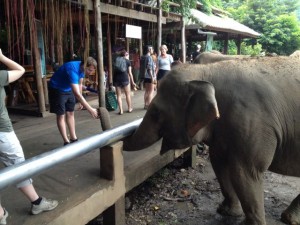 At bath time, people splash water on the elephants from both sides, so you had to be careful or risk getting soaked by a bucket of water from another visitor.  Shelley figured that out a little too late… 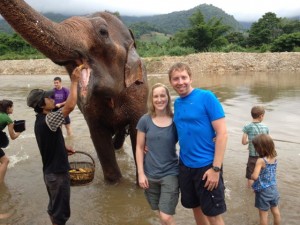 The elephants are huge, but unless they trumpet, they hardly make a sound.  Several times during the day we found that an elephant had snuck up on us from behind looking for something to eat.  We were both amazed (and a little intimidated) at how close we were able to get to these powerful creatures.  Here are a couple of videos of Shelley feeding the elephants up close.  Pretty amazing.

Shelley Feeds the Elephants
This entry was posted in Adventure 2012, Awareness, Recreation. Bookmark the permalink.