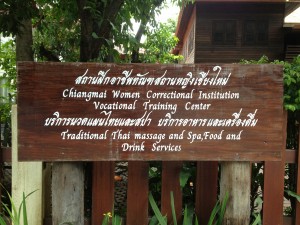 I’ve always assumed that getting a massage is an inherently self-indulgent act. I suppose that in the process I’m helping someone to make a living. But not until we got to Chiang Mai did I learn that I could be charitably minded while being pampered at the same time. Sounds too good to be true, right?! Well, at the women’s prison in Chiang Mai, they provide training opportunities so the inmates can learn different skills during their time behind bars, in an effort to reduce recidivism rates and provide the women with a means to support themselves following their release. Some of the women learn food preparation, some learn to make crafts, and some are trained in Thai massage. At the training facility, for about $6, you can get an hour-long traditional Thai massage from a non-violent offender scheduled to be released in six months or less.  Sign me up! The fee for the massage goes into a savings fund that is apportioned to the inmates upon their release, to provide them with start up funds to get back on their feet.

The training facility and massage center are located across the street from the main prison building. When I arrived, I could hear loudspeakers broadcasting announcements in Thai inside the prison walls. I wondered what was being said as I passed through the door into the massage center. I was led into a bright, clean room with several massage tables as well as a few pedicure-style loungers where they do reflexology. For Thai massage, you remain fully dressed, but you need to be wearing something really loose and comfortable, so they handed me a set of clothing and sent me into the changing room. The pants were easy to figure out–they were more or less like drawstring cotton pajama bottoms. The top I had a little more trouble with. It looked like one of those dressing gowns they give you to wear at the doctor’s office for an exam. I wasn’t sure if I was supposed to tie it in the front or back so I just did like I do at the doctor and tied it in the back. When I came out of the changing room and saw some of the other ladies ready for their massages, I saw I’d gotten it backwards, so I turned it around and did my best to tie it properly. But there were lots of ties and I basically made a mess of it. The massage therapist-inmates giggled at how I’d tied my top and then they sorted it out and re-tied
it correctly for me.

When they start the massage, the first thing they do is wash your feet. In Thailand, feet and shoes are seen as unclean, and before you enter any building you’re supposed to take your shoes off–whether it’s a temple, hotel, pharmacy, or mini-mart, you’ll see a pile of shoes outside. 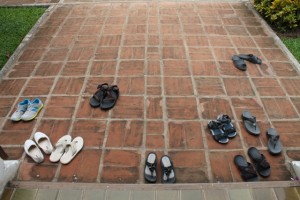 So I guess before they started the massage they wanted to make sure my feet were clean. The foot bath was refreshing–it’s SO hot and humid here!–and then I laid down on the table for my massage. Never having had a Thai massage before, I wasn’t sure what to expect. Our friend Cate described it as “yoga with two people,” which is totally accurate. There were three other ladies in the room with me also getting massages at the same time, and it seemed our therapist-inmates took us through the prescribed series of movements in unison.  You start on your back and they manipulate and contort and twist your legs in all different directions to stretch them out. I had my eyes closed, but I could tell at one point she was pulling on my legs by holding one of my feet in each hand while simultaneously pushing on my thigh with one of her feet to stretch out my hip. All of the stretching was great, but I wished they would hold the poses for a little longer–instead they go through the movements in quick succession. Then she moved on to push and pull at my arms and finally yanked me into a cobra position while she pulled my arms straight back to stretch my lower back. That kind of hurt.

They’re also real big on cracking all of your joints. As she worked on my arms and legs, she cracked all of the knuckles in my fingers and toes. I guess I should have been expecting it, then, when she had me sit up and place my hands behind my head, and then she pulled at my elbows, twisted me around and WHAM! my back cracked. She tried to crack my neck, too, which is all messed up from carrying my large backpack, but it resisted. All of the knots in it pretty much aren’t allowing it to move at all.

I was kind of in a daze after the back-cracking and somewhat relieved that the hour was over. What I’d heard was true–Thai massage is not the pleasant, soothing, sleep-inducing Swedish massage I’m used to at home–it was a little painful and more like a workout session than a time for relaxation. After it was all over, they gave me a cup of tea to revive me, and once I’d changed back into my street clothes it was time to go.

I’d been curious to see what a Thai massage was like, so it felt great that I got to try it out while being lucky enough to support a worthwhile initiative at the same time. But I’m not sure I’ll be going back for another Thai massage–maybe next time we can just eat in the prison cafe or buy some of the inmates’ crafts!

This entry was posted in Adventure 2012, Awareness, Culture. Bookmark the permalink.

One Response to Doing a Good Deed…Through Self-Indulgence!