After our day touring the Hanging Monastery and Yungang Grottoes, Shelley and I ventured out to a restaurant in downtown Datong that was suggested to us by our wonderful tour guide, Nancy.  This was a bit more complicated than it sounds because without Nancy by our side, there was a serious language barrier for us in Datong.  Besides Nancy, who spoke very good English, and the hotel reception, whose English was sufficient, there was not an English speaker in sight.  It was similar in Beijing, but with Datong being so much more remote, venturing out solo here was the first time on our trip where Shelley and I really felt like we were all on our own.

When we arrived at the restaurant, we were seated inside of a nearly empty dining room.  It was clear that they didn’t get many western customers – we could feel that all eyes were focused on us.  We were attended to by 2 waitresses who were obviously very fascinated by us.  One other young, Chinese woman, who appeared to be the manager, watched intently from the corner.

We tried to order drinks from the waitresses, but nothing we said or did would work.  Even our attempts to order a Tsingtao beer, which we thought we could pronounce, fell on deaf ears (we must have gotten the tone wrong).  Just friendly, awkward smiles and quizzical faces all around.  Even the manager came over to try and lend a hand, but it just wasn’t happening.  Luckily, I remembered that my smart wife had downloaded a “point it” dictionary to her iPhone before we left Texas just for this very occasion.  So, we busted that out, found a picture of a beer and a bottle of water, and after about two minutes of pointing and nodding, our waitresses went off to fetch our beverages.  We did it! 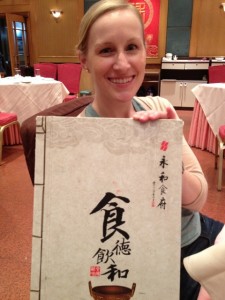 While our drinks were being served, Shelley and I opened up the large menus placed before us and began taking a look.  What we weren’t expecting was the Chinese waitress to patiently and politely hover over us as we made our decision.  As if we needed the added pressure!  We, of course, tried to tell her that we needed a few minutes, but the “point it” dictionary wasn’t any help for that one!  Instead, we opened our menus and began awkwardly searching for something to eat while our waitress stood by and the other staff continued to watch us intently from afar.

Luckily for us, there were pictures for everything in the menu and underneath each picture was an English translation for the dish.  You’d think this would have made things easier.  Instead, it was all we could do to keep our composure.  The English translations were hysterical: 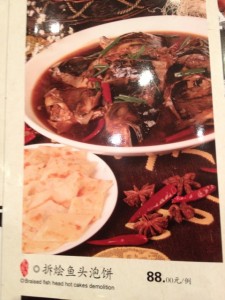 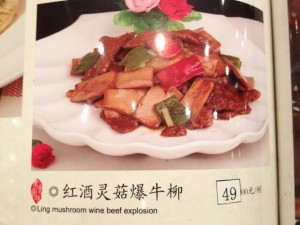 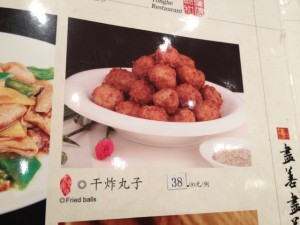 And our personal favorite… 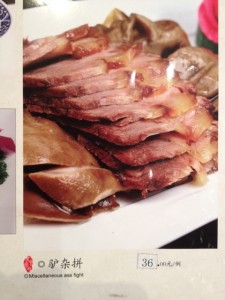 It was so hard for us not to laugh!  But, the waitress was standing right there waiting for our order and everybody else was staring at us.  We were trapped in one of the most awkward moments of our lives!  Somehow we managed to pull ourselves together and order some food.

After all was said and done, Shelley and I had a very nice dinner – soup, fried rice, and some of the tastiest fried chicken we’ve ever had.  You just had to overlook the deep fried chicken head staring back at you at the top of the plate. 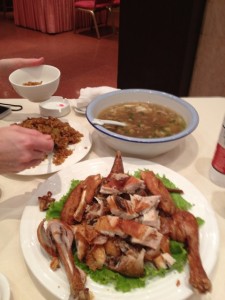 This entry was posted in Adventure 2012, Food. Bookmark the permalink.

One Response to Dinner in Datong