The local currency in India is the rupee.  The visage of Mahatma Gandhi is prominently displayed on each bill.

Rupees were also difficult to spend, due to the need for small denominations.  ATMs would provide 500 and 100 rupee notes.  However, people mostly transacted in bills much smaller and it was often very difficult to get change when using larger bills.  Shop keepers didn’t like giving away their smaller bills.  Sometimes you just had to force the issue, saying you didn’t have anything smaller in order to change a larger bill that later you knew would have to get you through the rest of the day. 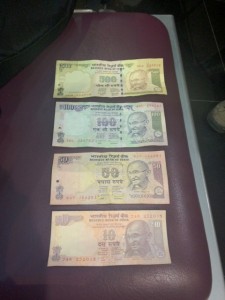 This entry was posted in Adventure 2012. Bookmark the permalink.

One Response to The Money Trail – India