Sunrise at the Taj Mahal

We rolled out of bed at 5am, threw on our clothes, and headed to the hotel lobby to meet up with my dad, my sister Anne, and our guide for a sunrise tour of the Taj Mahal.  We waited in line as it first began to get light and then all of a sudden the gates opened and we hustled through security, eager for our first glimpse.  The guide stopped us for a minute to explain some of the history of the building and to make sure we’d fully appreciate the accuracy and precision with which it was built, especially how it perfectly aligns with the walls and arched gateways that enclose it, which you never hear much about.  Then we passed through the southern gate and joined the throngs snapping pictures. 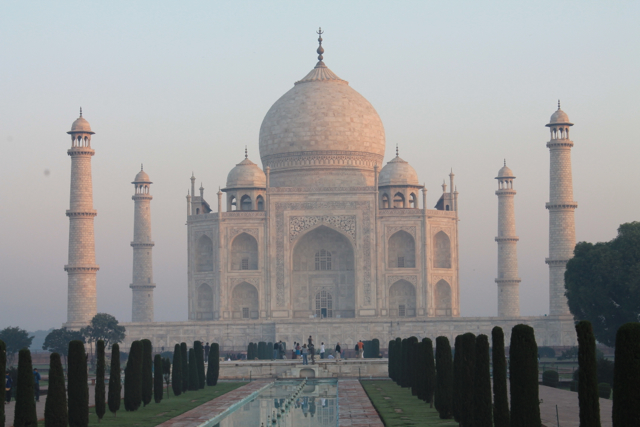 We always hear that the Taj Mahal is the world’s most famous memorial to love, so we were a little amused to learn that it was actually built to honor Shah Jahan’s third wife, who he married while he was still married to the first two.  We’d all romanticized the building a little more than that and had assumed he’d just been consumed by his love for his one wife, but we learned that it’s hard to know whether the building was truly built for love or to demonstrate the magnificence of Mughal architecture.  In any case, it was breathtaking–not just the perfect symmetry of it and the beauty of the marble that seems to change color as the sun comes up, but also the details that you don’t really see until you get right up close to the building–in particular the carved marble panels and the inlaid stones set in various patterns. 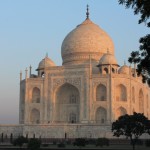 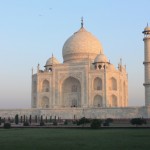 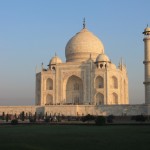 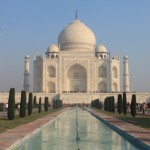 Our guide told us that we were lucky–that the day we visited was the clearest day he’d seen in about a month.  The pollution still seems to have softened the lines of the building, but he said we were getting the full experience, unlike other recent visitors.  The extreme pollution in Agra is really taking a toll on the building, though, causing acid rain that is eating away at the marble.  I took a picture of John when we stopped for a moment at the back of the building overlooking the Yamuna River.  You might think it looks foggy outside, but it wasn’t–it was just smoggy. 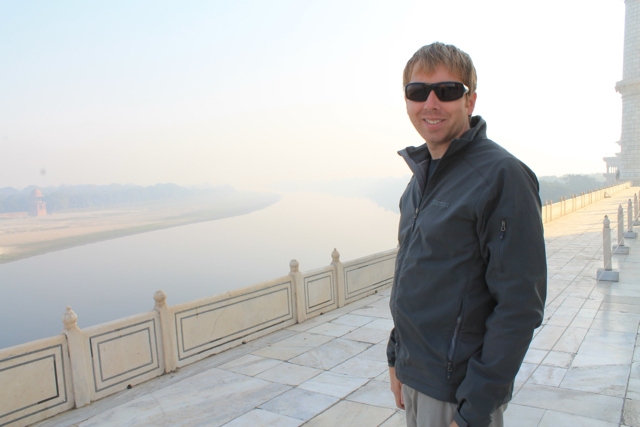 My absolute favorite moment of our visit to the Taj Mahal happened just before we were about to leave. To give some background, all over India people had been taking pictures of us.  Sometimes they would ask to pose with us (while we held their babies!), but more often than not we’d notice their smartphones slyly pointed at us as they passed by.  I was surprised that we were such a novelty there.  I guess I figured that as a former British colony, they’d be more used to seeing westerners.  After a while I felt like I was starting to get a taste for how celebrities must feel when targeted by paparazzi, and at my dad’s suggestion I decided to take pictures right back of the people taking pictures of us, which they seemed to get a huge kick out of, and it made it a lot more fun for me, too.  The boldest picture-takers would also engage us in conversation, which my dad loved.  I think he especially enjoyed having the opportunity to portray American tourists in a friendly light.  One day during our trip, at an old fort in Delhi, a group of high school students on a field trip with their teacher stopped my dad for pictures and an interview.  They asked him where he was from and if we had anything in our country like the fort we were visiting (answer: no, our country isn’t that old!).  I remember him talking about George Washington as the father of our country, somewhat like how they think of Gandhi.  I had fun snapping pictures of my dad being interviewed by the kids at the same time that they were taking pictures of him and the rest of us. 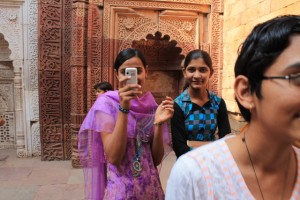 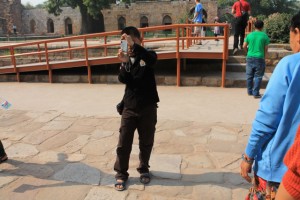 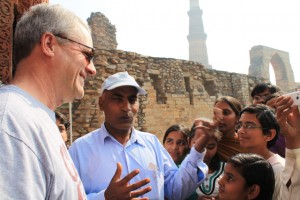 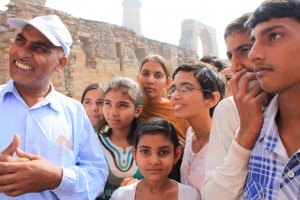 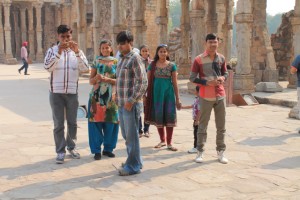 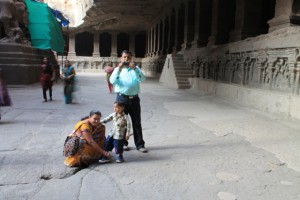 So back at the Taj Mahal, John and I had stopped to sit down where we could just soak in the view.  We noticed a couple of young Indian guys tentatively approaching, and they asked if they could each take a picture with John.  I hopped up and out of the way and one at a time each of them snuggled right up to John, practically sitting in his lap, to take pictures of the other.  It was hilarious.  Clearly our concepts of personal space and not being too intimate with strangers do not translate in India.  After they took their pictures I asked them both to pose with John.  I think they almost managed to kidnap him from me, but luckily I kept him in the end! 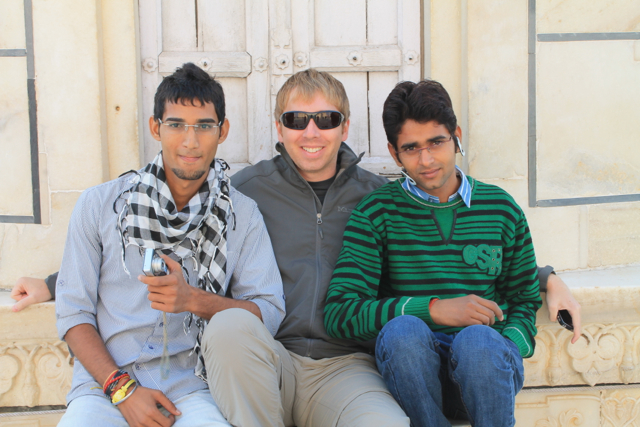